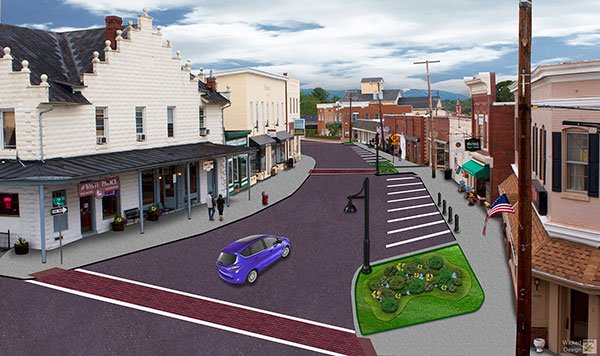 The Town of Purcellville, located in northern Virginia, had a need to communicate to the public its plans to refurbish 21st Street. They wanted to present an illustration that clearly showed what the final look and feel would be once the project was completed. Wicked Design was hired to use the existing road plans and turn them into a rendering for this purpose.

Starting with photographs, taken on the roof of what is now Catoctin Creek Distillery, one was chosen to serve as the view point for the illustration. The project began by removing components deemed to be interfering critical components. These included power lines, parked cars, asphalt and paving stripes.

Once a clean version of the photograph was complete, we then had to study the engineering drawings to determine how the plans would be overlaid using design techniques. While the project focus was to convey ideas, it had to also be accurate. This included alignment of the new sidewalks, crosswalks, street striping, landscaping beds and ancillary components.

Using Photoshop as the main design tool, elements were digitally hand drawn to represent the required components. Shapes were created to represent the roads and sidewalks. These shapes were then filled with appropriate textures representing the type of material that would eventually appear within them. To increase the level of realism, shadows were added to provide components with “weight” and height.

The landscape beds, featured at the end of parking rows, needed to be filled with virtual mulch. The engineering plans contained complete landscaping details, down to the type and number of plants. Following the addition of the mulch beds, plants and flowers were added on top. Because a series of layers were used when adding new art elements, all aspects could be independently modified as needed. This method of layering design components is required for a digital illustration requiring as much detail as this project called upon.

There were several objects that needed to be overlaid on top of the new roads and sidewalks. These included lamp posts, bollards, cross walks and road striping. The posts and bollards were created using a 3D design application. They could be created once, and then rendered from any angle, or assume lighting from any time of day. Inside of the 3D program, the objects were positioned to reflect their placement within the final Photoshop rendering. Then, 2D images of the objects were created and placed within the illustration. Shadows were added underneath them to create a heightened sense of realism.

The final graphic design touches came in the form of a car, people and additional plants. These component details lends an additional level of realism to the design. It brings in the human element and helps to soften the overall design.

This same process can be used to visualize nearly any project. Visually seeing the outcome of a project is valuable in communicating ideas, selling a viewpoint, landing the deal or simply educating a constituency. Do you have the need to visualize a complex project? If so, Wicked Design will be happy to address your questions.

This video shows the project coming together in steps.